Come and join us at the Baitul Futuh Mosque in Morden around the ‘Celebration of the Cultural, Ethnic and Religious Diversity of Our Armed Forces.’ This will take place on the 12th of June, between 3:30 pm and 5:30 pm at the mosque and also present will be the Muslim chaplain to the Armed Forces and the Adviser on Muslim Communities to the Ministry of Defence. 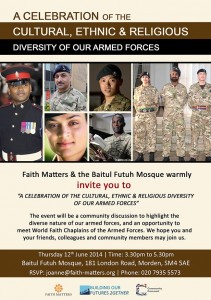 12th March Event in Enfield:  ‘Women at the Heart of the Armed Forces’

Our third event took place on 12th March 2014 and centred on the role of gender in the Armed Forces. Speakers and special guests of the event included Deputy Lieutenant for the Borough of Enfield John Rodwell, Senior Chaplain to HM Armed Forces, Reverend Kevin Bell, Hugo Clarke Director of the Curzon Institute and Caroline Jopp & Karen Stafford of the Military Wives Choir Foundation. The event was chaired by Fiyaz Mughal OBE, Director of Faith Matters.

The event was opened by a warm welcome to the Borough by John Rodwell; he spoke proudly of his years of service within the Armed Forces, and praised the project on its aims and objectives, highlighting the need for such discussions and the way in which they can lead to greater knowledge and trust within local communities.

Fiyaz Mughal then spoke, beginning with a brief overview of the project, and what has been achieved so far at previous sessions. He was followed by Reverend Kevin Bell, Senior Chaplain to HM Armed Forces. Kevin spoke highly of all of his World Faith Chaplains, and the support that is offered by them, to all in the forces. He highlighted the way in which men and women were entirely equal within the Forces, and that women were respected and given any opportunities they desired within the Forces.

The session included a highly enjoyable and insightful presentation by the Military Wives Choir Foundation. It was inspirational to hear the achievements of an organization that is relatively young in its existence, and to hear about the way in which it supports and inspires thousands of women. It was clear from the presentation that the Foundation is a way of empowering and supporting so many women, bringing them together with like-minded people who can identify and emphasize with each other.

Hugo Clarke, Director of the Curzon Institute brought the speeches to a close, with an inspirational presentation on women within the commonwealth who served in the first and second world wars. He spoke about the contributions and the roles that have always been played by women in the British Armed Forces and gave three fantastic case studies. 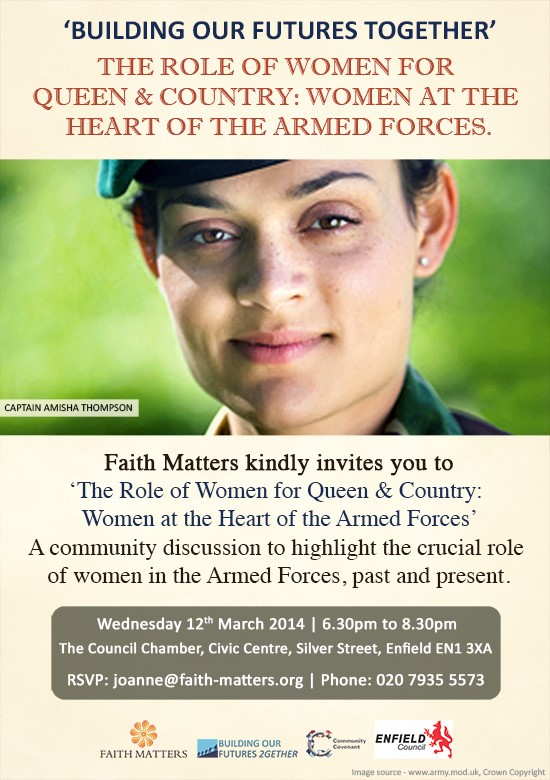 27th January Event in Haringey : ‘A Celebration of the Multi Faith Nature of the Armed Forces’

Our second event in the series took place at the Civic Centre in Haringey on January 27th 2014, with the theme of the diversity of the Armed Forces. Speakers at the event included The Mayor the Worshipful Councillor Sheila Peacock, Borough Commander Mr Victor Olisa, Senior Padre Kevin Bell & Dr Sunil Kariyakarawana of the Armed Forces. The event was chaired by Fiyaz Mughal OBE, Director of Faith Matters.

Ms Peacock opened the event speaking proudly of the borough of Haringey, and of its Diversity and highlighted the importance of such projects such as ‘Building Our Futures Together’, in strengthening community relations within communities and with the Armed Forces. Mr Olisa followed and spoke of the diverse nature of Haringey, and dispelled some of the myths about the borough being difficult, or problematic by sharing some of the positive stories and case studies that he has experienced over his years in the Police force and as Borough Commander for Haringey.

He spoke passionately about both the difficulties and highlights of his career in the Police and likened his experiences to that of people in the forces, in the way that they are both sometimes viewed by communities, particularly those of ethnic or faith minority. Following Victor spoke The Reverend Kevin Bell, senior chaplain to the Armed Forces. Kevin spoke passionately about his role as a Chaplain and about his upbringing and journey which brought him to where he is today. He spoke of the pastoral care he has offered to serving men and women of all faiths, in the United Kingdom and abroad. He highlighted the fact that as a Christian helping a man of another faith, he is not being disloyal to Christ, and encouraged others of all faiths to feel and act in the same way. Kevin spoke inspirationally and shared several emotional case studies before introducing Dr Sunil Kariyakarawana, Buddhist chaplain to the Armed Forces. Sunil spoke about the challenges that he, and other Buddhists, faced by deciding to join the Armed Forces whilst remaining a dedicated Buddhist. He spoke about levels of discrimination, and questions he faced or accusations that by choosing to serve in the forces, he was therefore being disloyal to his faith. He also spoke about his experiences of the Buddhist Armed Forces Conference and read an inspirational message from His Holiness the Dalai Lama, who sent this to all attendees of the conference, reminding them of the importance of their faith but also the flexibility of it, assuring that they can be both soldiers and Buddhists, emphasizing the importance of peace and happiness of the greater good. 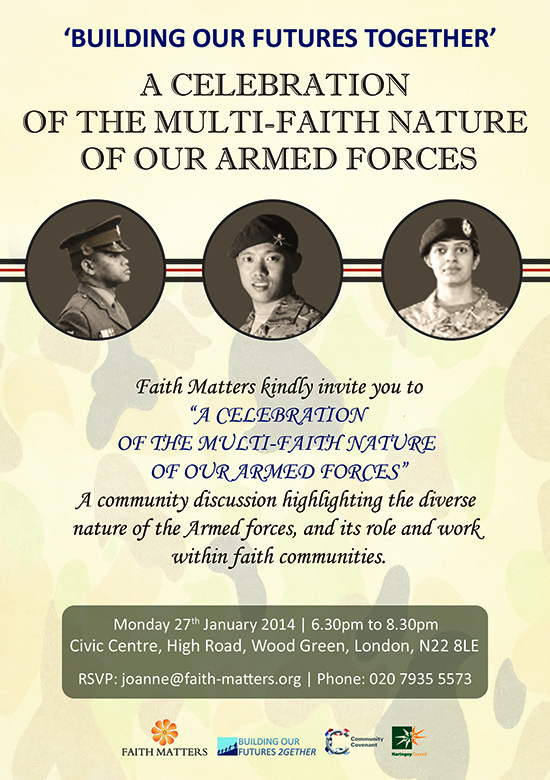 We are holding the first of our ten sessions in Camden on Tuesday 7th January 2014 at 6.30. The title of this session is Diversity within the Armed Forces, and will be a community discussion on the past and current roles undertaken by Commonwealth soldiers within the British Armed Forces. This will be a platform for dialogue between various local community members of differing faith, and of none. The session will include speeches by The Reverend Kevin Bell, Senior Chaplain for the Armed Forces and Hugo Clarke, Director of the Curzon Institute. We warmly extend this invitation to our contacts, friends and community members. 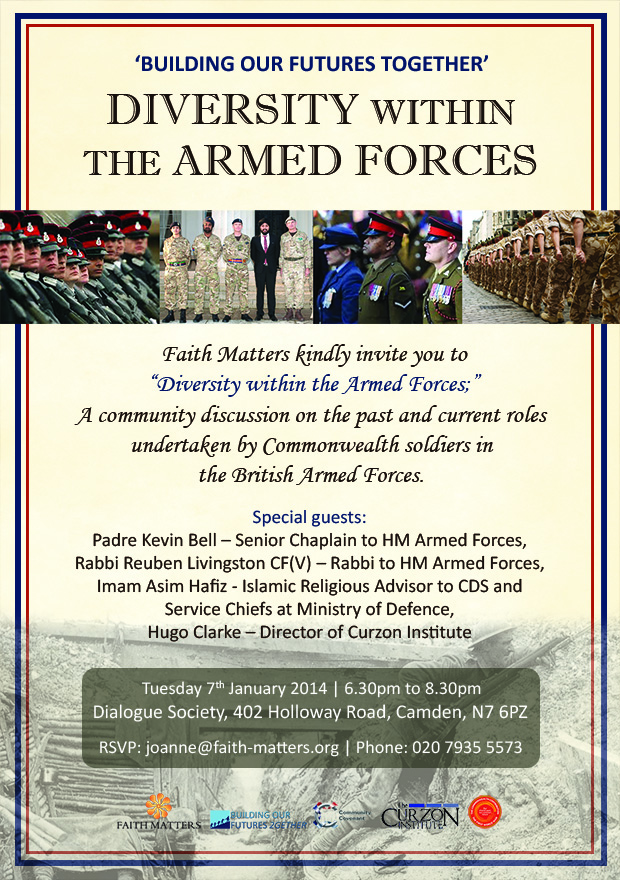